by Ensemble Klang with Keir Neuringer 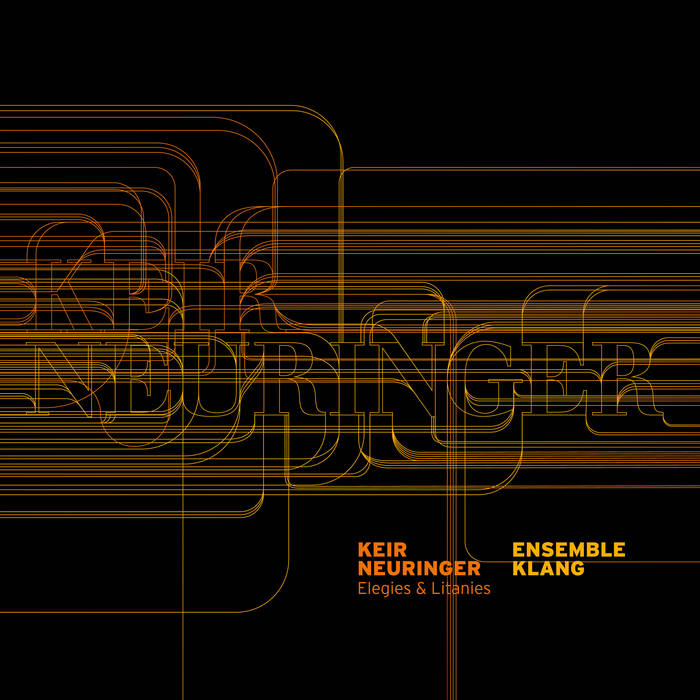 edcomposer This is a beautiful piece of work.

As long as he has written music, Keir Neuringer (1976) has imbued his work with a sense of urgency and a mordant earnestness about the harm and desolation of so-called Western culture. On Elegies & Litanies, outrage, despair, and a mourning for the gone world are revealed in a compositional palette that is at turns angular, smoldering, menacing, but also arcadian. These are works born as much out of the composer’s studio as out of the rehearsal studio with Ensemble Klang. For Neuringer, hope evolves not necessarily out of content or form, but out of action: in a personal formulation of Gramsci’s pessimism of the mind, optimism of the will, it evolves out of the shared ritual of music making.

These three compositions—the notations, texts, performances, and post-production work taken together—speak for themselves. Rather than an introduction, here is an afterword. Elegies at the Border was constructed of work fragments from across the past decade. As with much of my work I am trying to acknowledge, to memorialize, to construct a temporal, sonic monument for some loss that is at once both specific and transcendent of its particularities. But in this work the catastrophes monumentalized are too numerous to name; they are total. The incidence of harm and hurt and ruin in our culture is not isolated but interlocked and mutually accelerating. Tragedy is everywhere, the cruelty abject, the outrage utter, the loss complete. The phrase “at the border” in the title refers to a specific border, and all borders, and the borderline between what in our culture is salvageable, redeemable, and all that is not.

Litanies of Trees was conceived as a companion piece. From the scene of the ruins evoked in Elegies I find myself, with my survivor guilt, still here. Litanies is a composition arising out of a deep love and reverence for the woods—places of comfort and solace to me—and the anxiety and sadness I experience living through the cataclysmic destruction of forests, biodiversity, and indigenous land throughout the world. Our dependence on trees is at once biological, cultural, civilizational, and personal. The enormity of the environmental decimation and collapse of our time greatly exceeds my ability to articulate it, but articulate it one must; whatever else this work is, it is also a note to my son and walking companion, Emiri, to whom the work is dedicated.

Where Elegies is, for me, compositionally expansive in scope, Litanies was composed quickly and simply, as a proposal of a piece of music that was actualized in rehearsal with Ensemble Klang. It’s a simple canon, the length of which is determined by the performers as they play, and related in obvious and oblique ways to liturgical and performance litanies of the past. The single melody line Thoreau Day (for Kadri Gopalnath) serves here as an interlude between these two works. Sourced from the same 2012 melodic diary as much of the Elegies material, it is named as a gesture of respect for two inspirational figures, one the early anarchist and naturalist, and the other the revered master of Carnatic saxophone.

All works written by Keir Neuringer